Skip to content
Review The
Kiss of Deception (The Remnant Chronicles #1) by Mary E. Pearson

Synopsis: A princess must find her place in a reborn
world.

She flees on her wedding day.She steals ancient documents from the Chancellor’s secret collection.

She is pursued by bounty hunters sent by her own father.

She is Princess Lia, seventeen, First Daughter of the House of Morrighan.

The Kingdom of Morrighan is steeped in tradition and the stories of a bygone
world, but some traditions Lia can’t abide. Like having to marry someone she’s
never met to secure a political alliance.

Fed up and ready for a new life, Lia flees to a distant village on the morning
of her wedding. She settles in among the common folk, intrigued when two
mysterious and handsome strangers arrive—and unaware that one is the jilted
prince and the other an assassin sent to kill her. Deceptions swirl and Lia
finds herself on the brink of unlocking perilous secrets—secrets that may
unravel her world—even as she feels herself falling in love.

Hello there, instant need for sequel.

Hello there, instant love for Rafe and Kaden.

I welcome you all with open arms, because I brought this upon myself by reading
The Kiss of Deception.

Gods above, this book is unputdownable deliciousness and it is
totally worth the raves and hype. So this review won’t exactly be a review —
my lips are sealed and my hands tied because I’d hate to give anything away
from the glorious slow-burn and anticipation this novel sparks. I’ll just be
vague and I’ll ramble and I’ll gush and I’ll fangirl. I probably won’t even
make much sense because I’m this close to turning into a pile of mush and I’d
suggest you go with the flow and stop hunting for clues to why this book is
awesome. It just is. Now I need to breathe.
“Today was the day a thousand
dreams would die and a single dream would be born.”
The aspect that told me that I’ll have a fine time reading
TKoD was actually its first line. Shattering dreams and forging new ones is my
guilty pleasure and when a girl manages to accomplish that by fleeing on her
wedding day, to say that I’m completely enraptured would be an understatement.

This girl is strong, compassionate and unyielding. Lia, as
she likes to be called, is an independent and fierce young woman who happens to
be the princess of The Kingdom of Morrighan being sent off to marrying Prince
of Dalbreck, a neighbor-hooding land, to set an alliance. What happens from
then on is a true testament to the girl’s desire for free-will and simplicity.
Her adventure is fascinating and it depicts wonderfully both
the delightful and awe-inspiring elements Pearson has created in this universe,
but also the sorrowful, darker and merciless ones. Coupled with an exquisite
world-building that teases us with the lovely Terravin, hellish Cam Lanteux and
everything in between, we are assured that the world portrayed is far from
perfect and just, but also full of miracles, wonders and almost magical
possibilities.
“I see only reminders that
nothing lasts forever, not even greatness.”

I faced him. “Really? And just what would that be?”

“The things that matter.”

In this regard, I have only words of approval. The spin on the
fantasy the author wove through the plot sucked me right in with a teasing
flavor that ensures the next installments will provide a fair amount of
kick-ass developments in this area. At the same time, the mythology and
historical background Pearson offered only amplified the feeling that the
possibilities where this story could be taken are endless. I’m quite psyched to
see what it is headed towards.
My one slight complaint would be — as obvious from my read
stats — the lack of action in the beginning. TKoD is the kind of read that
keeps building and building (including the romance department, ahem) until a
high note is achieved, leaving you awfully satisfied even though you didn’t see
a whole lot of fights and bloody corpses. The author throws you bits and pieces
of violence and gut-wrenching scenes, enough to cut the story with cold, hard
edges and imprint it with the necessary dangerous atmosphere. It still allows
you to breathe and analyze, but somehow it traps you in and blocks every
attempt at enjoying the book as a light, heartwarming story even though these
nuances are present. It’s still high fantasy, after all.

The topic I’ve avoided and I’m certain you’ve been waiting
for — the romance. I’m sure you’ve heard some things about it as I’m sure you
know there’s a love triangle. There is, in fact, a love triangle and I’m going
to bluntly say that it is brutal. Expect deception. Expect swoons. Expect
secrets. Expect stomach butterflies and sighs. Expect sexiness and intensity.

Expect everything, because with
the plethora of twists (the holy shit kind; Bravo, Pearson!) you’ll love both
the boys vying for Lia’s heart even if one of them will crush your heart in the
process. The betrayal is bittersweet, somewhat understandable because it
tethers the line between love and duty and there’s never an easy way to choose
the one most powerful. 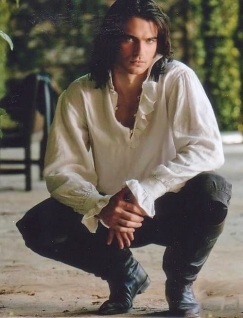 “And if one can’t be trusted in
love,” I added, “one can’t be trusted in anything.”
However, I did pick my favorite and I’m honestly intrigued
how (or whether) the author will try to sway my opinion in the follow-up, since
the tables have turned and the true faces behind the masks were unveiled,
leaving us judging humanly flaws dead on, which is never an easy feat.
“When I’m not with you, I wonder
where you are. I wonder what you’re doing. I think about how much I want to
touch you. I want to feel your skin, your hair, run every dark strand through
my fingers. I want to hold you, your hands, your chin.” His face drew nearer,
and I felt his breath on my skin. “I want to pull you close and never let you
go,” he whispered.”
Some other aspects I’d like to applaud would be: the
presence of strong, well-defined secondary characters I haven’t expected —
especially Pauline; the bravery to kill us a little by making us love a certain
character we haven’t deeply explored in order to have the chance to do so
chopped away; the balanced pace that, considering its lulls, allowed the
plotline to move along nicely and, of course, the gorgeous capability of Mary
E. Pearson of weaving such an enchanting tale.
Now I honestly don’t know what I’m going to do until The Heart of Betrayal comes out in a few
months. I’m quite obsessed. Consumed. Bewitched. An ARC would come in handy (am
I being subtle enough?).

Hopefully, you’ll pick this book up and hopefully, you’ll
enjoy it as much as I did. The Kiss of
Deception is a grand example of how a well-written novel can perfectly
blend elements of original fantasy, electrifying love and thrilling stakes. In
a game of hide and seek, there’s a possibility you might get lost forever, but
true beauty unravels when you fight with everything you’ve got to find the path
where you belong, just like Lia — and that’s why my admiration for her story
currently knows no bounds.
ENJOY! ❤