Dry
by Neal Shusterman
Jarrod Shusterman
Synopsis: The drought—or the Tap-Out, as everyone calls it—has been going on for a while now. Everyone’s lives have become an endless list of don’ts: don’t water the lawn, don’t fill up your pool, don’t take long showers.

Until the taps run dry.

Suddenly, Alyssa’s quiet suburban street spirals into a war zone of desperation; neighbors and families turned against each other on the hunt for water. And when her parents don’t return and her life—and the life of her brother—is threatened, Alyssa has to make impossible choices if she’s going to survive. 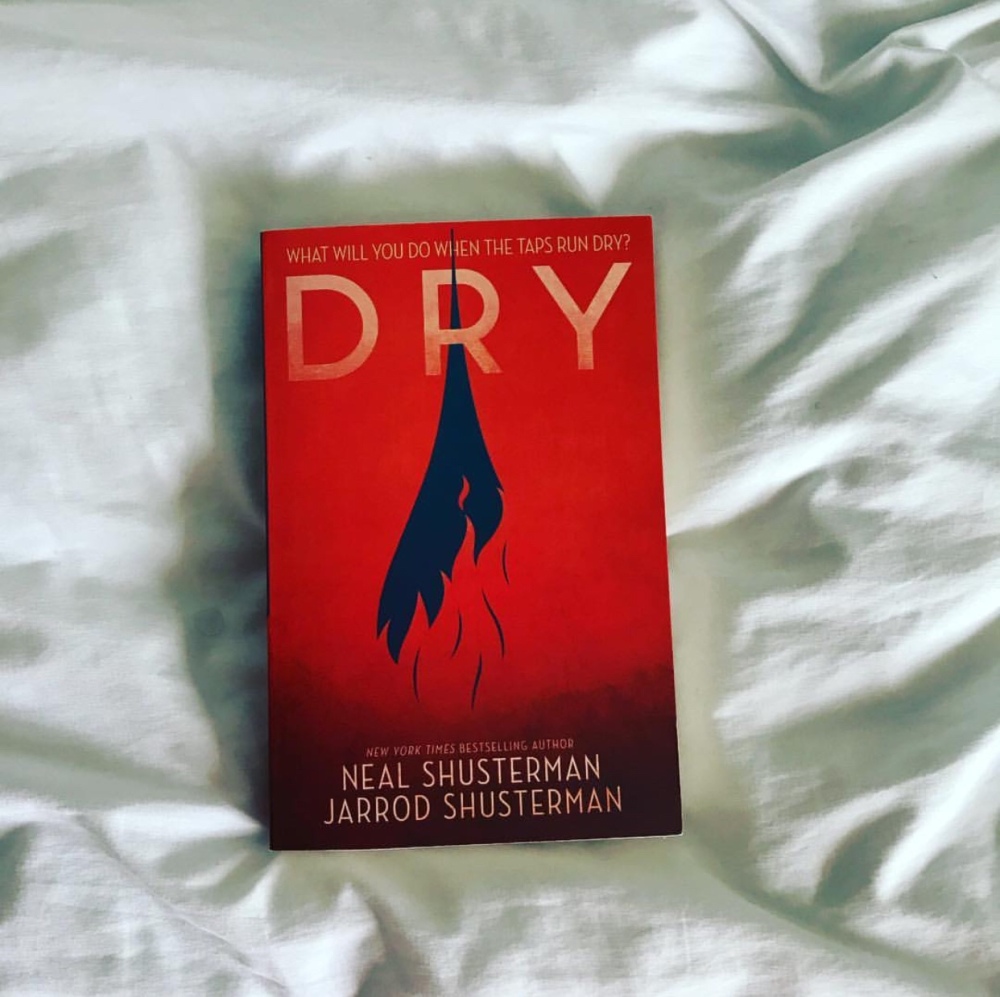 Every time I pick up one of Neal Shusterman’s books I’m simply amazed by how intense and thought-provoking it is and this book was no exception. I have the manuscript version (with very clear warnings not to post, share, or copy) and I don’t know how much the small stuff will have changed once the novel is released, but at the core, this story is about survival and human nature.
Alyssa and her family are a typical suburban family. They have a few water bottles in the fridge, some Gatorade, but they certainly did not stock up for a national emergency. Her parents, little brother, Uncle, and dog all need water and there isn’t enough to last a day.
Alyssa is a typical teenager, who is mostly worried about her homework and college when everything starts to go to hell. She has a fierce love for her family and will do anything for them. I really liked her little brother Garrett, he was also a kid with a good heart.
Kelton comes from a family that is survivalists, they are prepared for the worst. But they were not really prepared for what their neighbors will do to survive.
The story was beautifully written, although I’ll admit that I never really bonded with any of the characters. And, speaking of characters…there are a LOT of them. While I loved the snapshots of other people affected by the crisis, it did make it harder to deeply bond with anyone. Although I have to say that the ending made all of it worthwhile. Seeing how everything happened…yes, please! As for the ending, well, I didn’t love it. I mean, much of it was fine, but certain people…Ugh. Not gonna say more.
As I stated before this is a very plot-driven story that is very hard to put down. The story is very topical and very realistic. I don’t want to say much about it, because it is something that you just need to experience for yourself. There are very real passages about how society will break down and what it is like to die of dehydration. I always like to think that society will behave better in the face of catastrophe, but I think I know that it will really come down to chaos and everyone out to save themselves.